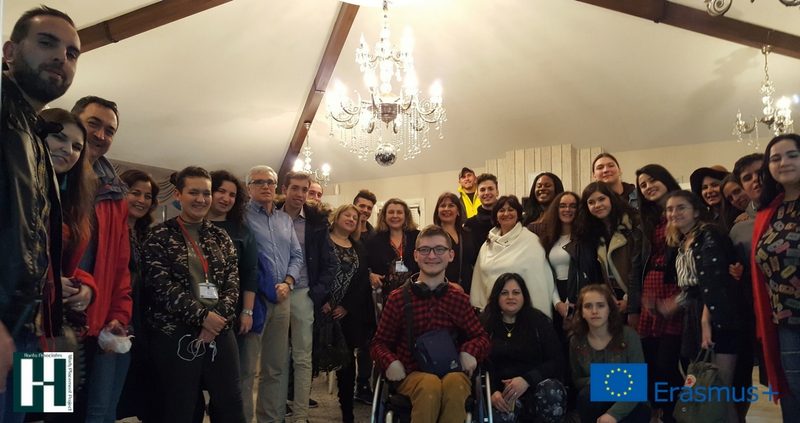 As the Dalai Lama tweeted in September 2016, the only way to change the society we are living in is to be more compassionate and to be more aware of the problems that surround our communities.

Change starts with us as individuals. If one individual becomes more compassionate it will influence others and so we will change the world.

This was exactly the purpose of the Erasmus+ Project named “The Change Starts With Us”.  The project wanted to increase awareness about the challenges young people with disabilities face in their everyday lives and to plant the seed for broader inclusion in the local communities (and in the scholastic environment).

Being able to accomplish these objectives would mean that people with disabilities do not have to leave school prematurely because they feel excluded or because they can not take part in the activities that could positively affect their childhood.

Disability affects 15-20% of the world’s population and globally speaking, at least 650 million people have disabilities worldwide. The data also shows that many disabled children have a much tougher time at school than their non-disabled counterparts, with 52 to 75% of the teenagers that are living with a disability confirming that they’d been bullied. The evidence has led the European Union to declare that one of it’s primary goals will be to reduce ESL (Early school leaving) to less than 10% of the proportion of people aged 18-24 who leave education prematurely.

Leaving out these numerical data, the project has several aims. First is to analyse the potential causes of exclusion amoungst young people with disabilities and secondly the contrast of the lifelong disadvantages. Once more, it is important to quote the purpose and the elements influencing the scholastic frame and all the difficulties that can affect school engagement among people with disabilities.

Thomas, one of the participants, told us:

“What a week it was thanks to this project! Full of new experiences and challenges. The programme was extremely broad, we visited several local schools, we talked about disability and how it is perceived by people, but also what to do to make life easier for disabled people. We’ve also taken part in a television interview. As I was the only wheelchair user, I had to come to terms with the fact that during each visit I was filmed and lots of photos were taken. Apart from work, of course, there was time for pleasure, we visited Ephesus, Izmir and also the House of Virgin Mary. Last but not least we have experienced the great Turkish hospitality and enjoyed the amazing Turkish food!”

For more information, join “The Change Starts With Us” Facebook group!